This 6th and last lecturing period of the year, I run a capita selecta course on Food Culture with some of the students from the regular course in February in which we read and discuss classics in food culture together. Like two years ago, there is a small but dedicated group of students eager to read entire books rather than the usual scientific papers. We just finished ‘Paradox of the Plenty’ by Harvey Levenstein, a very dense but easy and often funny to read social history of eating in the U.S. spanning from 1920s to about the 1990s. One of the stories to which we awed with amazement is about the abundance, diversity and quality of the food supply and diet of American soldiers during World War II. “Those who overran American positions often expressed amazement at discovering the quantity and variety of food GI’s had at their disposal, as did those fortunate enough to be taken prisoner by the Americans” Levenstein writes (p89).

Highly influenced by the embryonic nutrition science, it was believed that the population was gravely malnourished and had just about enough or latent deficiencies of many if not all of the just discovered vitamines. Hence, “modernizing military men had revamped their military rations” to “provide each soldier with all the necessary nutrients and at least five thousand calories a day” (p92,93). FIVE thousand? This provoked especially the nutrition students. 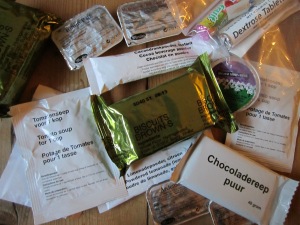 Of course we had no idea about how current troops are being fed at battlefields until one of the students revealed a box she had received from her work at the Food Bank – after much talking and persuasion because the Food Bank decided not to distribute the army donation. The Nato approved ration for 1 person gives insight in the current nutrition ideas and food technology usage. Breakfast and lunch in combat times consists of a box instant powders (soups, lemonade, chocolate milk), patés (mexican chili beans) and biscuits accompanied with chocolate bars, mentos, dextrose.

The amazement at the crazy Americans was brought home with opening this box. After all, we always look West, they are only a bit earlier.

3 thoughts on “Food at the battefields”