The Wadden Sea coast of Denmark from Tønder to Blaavand is a beautiful natural and rural area with three wadden islands Romø, Mandø and Fanø. For the third time, the biannual Wadden Sea Festival from 4 to 12 september draws attention to this area with various forms of Contemporary Art at many different places. One of the art projects is organised by Foundation Waddenart on the island Mandø. This is a special island, very small and only accessible at low tide through a gravel road at the sea bottom.

The project Any Questions on Mandø is an interdisciplinary project, an experiment to integrate art and research in one project and at the same time embed the project in a local place. Foundation WaddenArt started in collaboration with SDU to explore the question of quality of life for the inhabitants at Mandø in October 2009. The findings fed into the Call for Artists to attract Contemporary Art in Installation art, Performance art and Landart. Five different artist(groups) have been selected to work daily to create works of art during the festival in september. 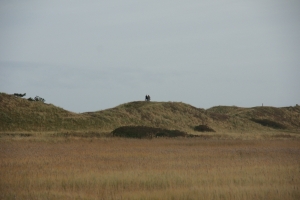 There is also space for three researchers to be involved in the project in september. We ask researchers to reflect from a research background in the social sciences or art & humanities to what they observe during the festival. We ask you to observe and write a short story based on personal experience and empirical observation which can be performed during the closing event on Mandø. Are you interested questions such as; How does contemporary art relate to the cultural and social life of the community on Mando? How do the people on Mando relate to a festival that is not theirs? How is Mando expressed? What symbols the links between past, present and future? What are defining factors in change and stability? Then please look at this link for the full Call text and the way to submit your interest to Foundation Waddenart.

Last Thursday (20th of May) I participated in an interesting workshop about citizens and animal welfare.  The workshop was organized at Aarhus University in Denmark and dealt with questions like: Whose opinion on animal welfare counts? How can one integrate the different perspectives of,  for example farmers, citizens, (animal) scientists and the government? We already know that citizens consider animals’ ‘naturalness’ a very important feature of ‘good animal welfare’. But what is naturalness exactly? Can you implement this in animal farming systems? Can you measure it? And what if the choice for naturalness is in conflict with other aspects, such as animal health? How do citizens make trade-offs between such dilemmas in animal farming? And how should one involve citizens in animal welfare research? Via surveys, farm visits, consensus conferences or are there other ways to be explored? To be short, although much research has already been done on animal welfare over the last decade, there are still many questions surrounding the animal welfare debate when it comes to citizens’ participation and involvement.

Raising new questions is of course a characteristic of research: finishing a research can give you the feeling that you answered some questions, but in the end it will always result in more questions. That’s what keeps us going. What in addition keeps me going, is the cooperation and discussion with other researchers in the world. Particularly after doing a PhD for six years on my own, it is really nice to exchange ideas and cooperate with other researchers in this field, like Jan Tind Sørensen of the Department of Animal Health and Bioscience and Peter Sandøe of the Danish Centre for Bioethics and Risk Assessment . During my PhD I often had the feeling I was one of the very few researchers who is interested in public perceptions of animal farming. But recently, the importance of the public opinion of animal farming is more and more acknowledged, also in the field Animal Science, of which this workshop was a good example.

Today I participated as a guest lecturer in the 8th semester course of Janne Liburd on “innovations in festivals and events” for Tourism & Business students. It is actually a ‘ capita selecta’  course and in today’s lecture we touched upon the relationship between rural development, European rural policy, asset based development and tourism. During this course, the students will also be introduced to a internet-based learning tool called Innotour which has just been launched. The website will serve as a platform for students, teachers and businesses in tourism to investigate innovative business cases and to exchange knowledge. For students it is a possibility to improve writing skills and to be involved in real life research settings by involvement in constructing business cases and research for partners connected to the network.

This weekend I stayed in Middelfart on the island Funen between Jutland and Zealand (on which Copenhagen is located). For many Danes, Funen represents the island you simply have to cross by highway to arrive in Copenhagen.

However, it has a really beautiful small scale landscape full of hills! The island is fairly round in shape, around 100 kilometers in diameter and is scattered with villages, old manor houses and wind shielding wood groves and hedgerows. It has a very good sea climate and one of the best soils for farming in Denmark. This is why Funen has a tradition in horticulture. It once served as the Vegetable & Fruit garden of Denmark. Whereas in many other places in Denmark and in Europe the Farm Shop was re-invented during the last decade, here it is a phenomenon which never disappeared. You can find self service shops along the roads and many of them, ranging from horticulture, to dairy and meat, organic as well as conventional, are organized in a network called Smagen af Fyn, which means something like the Taste of Funen. There are quite a number of local food producer networks in Denmark and several researchers at IFUL are studying the various aspects of these networks.

At the IFUL institute there is a lot of research and development experience with the European LEADER approach for rural development. During the previous LEADER+ programme from 2000 to 2006, Annette Aagaard Thuesen worked in the Danish National Network Unit for LEADER+ which was hosted by the institute. She is currently finishing a report for the Danish Food Industry Agency and the National Network Unit on the composition of the Danish LAG boards within the Rural Development (RD) and Fisheries programme 2007-2013 of which an English summary will soon be available.

For the Nordic countries, one of the results of mainstreaming the LEADER approach into the current RD Programme’s (2007 – 2013) of the Common Agricultural Policy is an increase in the number of Local Action Groups (LAGs) and an increased geographical coverage of areas working with the LEADER approach. Denmark raised the number of LAG’s from 12 to 55, Sweden from 12 to 65 and Finland kept its high number of 58. In the Netherlands, this expansion took place during the previous LEADER+ period and the current programme added 3 new LAG’s to the 28 of last period.

In Denmark, interestingly, the expansion of the LEADER approach led to a change in the institutional arrangements of LAG’s to secure the input legitimacy of the Danish LAG’s. Before, LAG members were, as in the Netherlands, appointed, without clear standards of entry. In this period LAG members are chosen by election and LAG’s have to be organized as associations with open and free membership, much like the Irish model. All people over 15 years living in the LAG area can be registered a member of the association and they can participate in elections. Board members are elected for two years and are to represent four groups:
– local citizens
– local enterprises and trade organizations
– local nature- environment- culture- citizen- and leisure associations
– public authorities
Like in the Netherlands, Danish LAG’s are mainly focused on the diversification of the rural economy, the so called ‘axis 3’ objective in the Rural Development Programme.

From 16 to 27 of Februari I am staying at the The Danish Institute of Rural Research and Development (IFUL) as a visiting researcher. IFUL is located in Esbjerg, at the western coast of Jutland. IFUL is an institute within the social sciences of the Southern Denmark University aimed at the development of sustainable rural areas specially focusing on business development and the population’s life condition. Whereas our group has its roots in agriculture and has broadened to rural and regional studies, this institute always had a territorial focus on rural development (working papers).

On Monday 23 of Februari a seminar will take place  entitled “the rural paradigm, hardly settled!- ready to move?”  The seminar is open to people from within and from outside the university with various contributors.