Sociology Research alerts the social science community to the latest journal articles considered to represent the best in sociology research. See: www.sociologyresearch.org. Sociology Research is viewed over 14,000 times per month and has an audience of academics and researchers from a growing number of the top 20 major academic institutions.
An article that had been published recently is: “Exploring the ‘New Rural Paradigm’ in Europe: Eco-economic strategies as a counterforce to the global competitiveness agenda”. This article describes strategies in rural regional development. For many regions an obvious choice is to compete with other regions for global mobile capital and labour. On the other hand, and as a counterforce to these global logics, new strategies, which are more place-based, are being developed, such as the construction of identities or images around new agricultural goods and services. The full article has been published in the journal European Urban and Regional Studies. 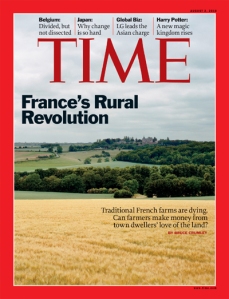 While waiting for my train at Utrecht Central station – I tend to kill my time looking around in the book/magazine shop – the cover of the latest Time Magazine struck my eye, heading: “France’s Rural Revolution, traditional French farmers are dying. Can farmers make money from town dwellers’ love of the land?”. Interested about the heading – and teased by the astonishing landscape on the cover – I bought a copy for the second part of my trip to Rotterdam.

Bruce Crumley (the author) poses the question what eventually will save rural France. French farmers are hit by a shrinking agricultural sector, falling food prices (globalization) and tightening E.U. support (so called CAP reforms (Common Agricultural Policy) in 2013). These developments are not exclusive to France, farmers in many other E.U. member states are facing these problems. However, future CAP reforms are considered to be critical especially to French farmers, since the French receive nearly 20% of the total CAP funding.

By illustrating the developments on three French farms the author focuses on one of the ways to get out of this tightening trap by diversifying the farm business with new (‘non-farming’) activities. A strategy also known as multifunctional agriculture. The farmers mentioned in the article developed new activities in rural tourism and the production and selling of regional products like beer and ham. Interestingly, the article has many parallels with the conversations I had myself (in relation to our research project on (Dutch) multifunctional agriculture). Apparently, many farmers (eventually) don’t regret their step on the multifunctional pathway. On the contrary, many farmers say to enjoy the new farm dynamics, contacts with new people and some even claim to have reinvented entrepreneurship. However, we needn’t to underestimate the step of ‘just’ diversifying your farm to survive. In the article colleague rural sociologist François Purseigle argues many farmers simply refuse to find new sources of income as they see diversification as a betrayal of the agricultural profession they took on. As a parallel, I experienced many interviewed Dutch farmers – who have made the step or are still hesitating in some way – have or are still struggling with their identity of being a ‘real farmer’: “It’s not just running a business” – one farmers stressed – “it’s a way of life!”. I think the notion of multifunctional agriculture has matured but still often perceived as something for losers or nothing ‘real farmers’ should deal with. Often the environments of hesitating farmers aren’t ready for this new way of farming, yet.

The article can be found on the Time website. The page also offers a great picture gallery about the topic.

I recently traveled to France for a short walking spring break. In the north eastern part of the country I visited the Alsace region. I stayed in the area left of the city of Colmar near the village called Munster (well known for its ‘smelly’ cheese). Although the break was a way of resetting my brain, I couldn’t stop myself from observing some interesting things.

The Alsace region
Although the Alsace is French, the area is characterized by many German influences. Not surprisingly because the area changed hands many times. The area has a strong regional identity which expresses itself physically, culturally and historically (architecture (timber framed houses), landscape, dialect, kitchen and regional products). The stork can be seen as the region’s main symbol and almost disappeared in the 1970’s. The region put a lot of effort in bringing ba

ck the bird (by starting breeding programs) and now storks can be found on roofs of houses and public buildings everywhere. All these things are characteristic to the Alsace region.

Wine walks
An important and unnoticeable regional product is wine (Vin d’Alsace) like Riesling, Gewürztraminer and Pinot Blanc. Since Roman times the Alsace has a strong tradition in growing grapes and over time has developed as a centre of viticulture. The area has an excellent terroir: good weather, climate, fertile soils and sunny slopes. Part of the rocky hilltops every small piece of the area is cultivated for growing grapes. This viticulture can bee seen as the (historical) backbone of this region into which over time whole sets of other activities got interwoven: visiting historical villages, local products / food, touristic walks etc. Central to this all is the wine and the attractiveness of the region. On my break I explored one of these really nice walks near the village of Kaysersberg. The walk started in climbing a woody and rocky hill and lead through the village of Riquewihr and via extensive vineyards back to were we started. In the vineyards information panels were placed to give information growing techniques, pruning, different varieties and the winemaking process. During the walk we stopped at several wine farmers / cooperatives for some refreshments and wine tasting.

These wine walks are an interesting way of using regional identity and products for regional development. The combination of activities, services and goods attracts tourists, strengthens the regional economy and contributes to the vitality and livability of this specific region. I got the impression the Alsace region is very succesful in this! 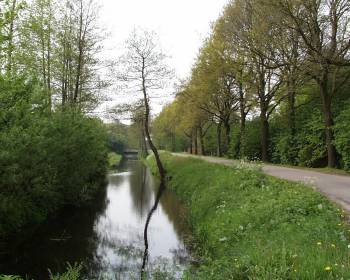 The modernization of Europe’s agriculture and rural areas has been uneven, also in the Netherlands. As Han argued (13 of March) rural regions subject to the Dutch spatial modernization project have become non-places, striped from ‘constraining landscape’ interchangeable, not worth to care for. Those areas which escaped this process are now heralded for re-discovered values beyond economic rationalization. The neighboring area to the Frisian Woodlands, the area Westerkwartier, located in the province Groningen is also one of those areas which escaped modernization through spatial reconstruction. Collective farmers opposition and rejected spatial plans in the 70s led to a voluntary and much diluted plan in 1989 which preserved farming and landscape structures.

In the southern Westerkwartier, the small-scale landscape with hedgerows, belts and alder trees is a strong symbol of local identity. The landscape reflects the soil structure with sandy ridges in north-west direction where many villages are located and in between lower peat moors and peat-clay soils. A poor soil in terms of farming and historically it was an area where living conditions were tough and where people sought their own diverse ways of sustaining their livelihoods often effectively resisting state intervention. From a modernization perspective the area/landscape was seen as ‘lagging behind’, from a local perspective the landscape symbolized resistance and a headstrong mentality.

Over the last decade the landscape received more and more attention and care by collaborations between farmers in agri-environmental trusts (Agrarische Natuur Verenigingen) and between those trusts and the Forestry Commission (Staatsbosbeheer). Ways have been explored to combine a viable farming practice with preservation of landscape and biodiversity. The meaning of the landscape slowly received another symbolic layer; that of an asset to be explored for cultural and educational purposes and for diversifying the local economy.

Students from Wageningen University, amongst others, have contributed to this development through a project called “Brug Toekomst”. Based on a local problem definition, master students of Wageningen University and the colleges of Van Hall Institute and Larenstein conducted research based on questions articulated in a local group/ network which emerged as a consequence of the project. Over the five years around 50 students visited the area for action research, leaving behind many reports and recommendations. But more importantly, the project evolved into a Community of Practice, a learning community in which different types of knowledge, experience and energy developed on the basis of equality. On the 2 of April a book, in Dutch, will be presented in the area which tells the story of this five year project and the local dynamics around it.

Since 2002, Rural Sociology Group is partner in a European Intensive Course Programme. MSc-students from universities across Europe can attend an intensive course programme of two weeks to study in depth rural issues in one of the particiapating countries. Earlier IP’s were organized in Ghent, Pisa, Cordoba, Faro, Malibor and, last year, in Kaunas, Lithuania.

As MSc-student I participated in the IP course in Lithuania last year and I have very good memories of the course which fully lived up to its name ‘intensive program’. The days were filled with lectures, excursions and activities aimed at providing us with a thorough inside into diverse problems (regarding society, environment and economy) encountered in rural Lithuania as well as teaching us methodological means to investigate these. On top of that, the course did not fail to allow for time to engage in social activities, providing the opportunity to get to know fellow course participants from various European countries. To support this unique opportunity to get acquainted with rural development in the EU, I will join this years’ IP as a tutor! Perhaps we will meet.

Agriculture, territorial identity and rural competitiveness
This year the IP is organized by the University of Life Sciences in Lublin, Poland, from April 19 till May 2. The IP is open for 52 students from the 13 partner universities. This year topic is the place of agriculture in territorial identity and competitiveness of rural areas and its contribution to rural development. Students that plan to do a minor or major in Rural Sociology and with an interest in the topic can apply and contact Jan Schakel: Jan.Schakel@wur.nl . A course programme and newsletter are available.